MOVING ON UP: THE HAUPPAUGE INDUSTRIAL PARK OVERLAY DISTRICT 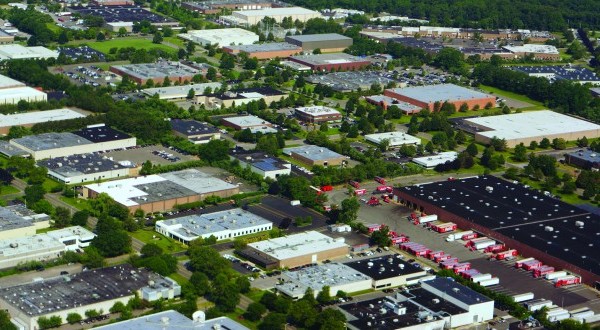 09 Sep MOVING ON UP: THE HAUPPAUGE INDUSTRIAL PARK OVERLAY DISTRICT

On Tuesday, July 14, 2015, the Town of Smithtown Planning Department approved the creation of a new zoning overlay district for the Hauppauge Industrial Park.  The new overlay district is a significant step forward in sustaining and bolstering the Hauppauge Industrial Park’s status as a fundamental location for business development on Long Island.

The Town of Smithtown Planning Department recommended approval of a motion changing the zone of the Hauppauge Industrial Park from Light Industrial (LI) to a Light Industrial Overlay (LIO). The approved overlay district allows for buildings of greater height, above and below ground parking garages, and outdoor storage areas.1

Buildings within 1000 feet of the Northern State Parkway will now be permitted a 50 foot height limit while buildings along Motor Parkway will be able to reach 62 feet.  In order to accommodate for the expected occupancy growth along with the change in height limits, the overlay district permits two story above and below ground parking garages as accessory uses to offices, hotels and other ‘non-nuisance businesses’.  Finally, outdoor storage areas are now permitted as long as they are screened off from view and are not placed within 10 feet of the property line.

Long Island is currently home to some of the most sought after locations for business creation in New York State, such as Garden City, Mineola, Rockville Centre, Melville, Patchogue and Smithtown to name a few.  New York State and its counties currently offer numerous resources and incentives for starting and growing businesses in the state, such as tax breaks and financial assistance programs for business looking to start or expand in New York.2  As a result, Long Island, and Suffolk County, more specifically, was able to shake national trends and foster more than 15,000 jobs during the recent recession.3  Most importantly, according to the New York State Department of Labor, Long Island’s concentration of health care, technology and education jobs makes it home to three of the fastest growing job fields for the foreseeable future.4

Town of Smithtown Comprehensive Plan cites in detail the critical importance of the Hauppauge Industrial Park.  The Volume V Draft Study of the Smithtown Comprehensive Plan states that only 3% of the Hauppauge Industrial Park is vacant.  Moreover, the expected growth rate in office space use, high tech manufacturing, and service industries ensures that such occupancy levels will continue. The current business uses for which growth is anticipated are office uses and biotechnology and pharmaceuticals.  It is interesting to note that traditional manufacturing, biotechnology and pharmaceuticals tend to require less space and employ significant numbers of high wage jobs.  It is important for the Hauppauge Industrial Park to be prepared to respond to such changes before they occur in order to remain competitive and in order to be responsive to the demands of new businesses and established tenants.

The Hauppauge Industrial Association was formed in 1978 in order to advocate on behalf of the tenants of the Hauppauge Industrial Park and has become a significant voice in the Long Island business community.  Noteworthy achievements have been; supporting efforts to create an exist on the Northern State Parkway into the HIP, working with local transportation departments to obtain needed safety features, such as traffic lights and walking lanes, create an integrated day care center within the HIP and partnering with Brookhaven National Labs to provide business opportunities for HIA members.

The new overlay district is an important step in supporting economic development on Long Island and allows the Hauppauge Industrial Park to respond to economic changes, permit the expansion of successful existing businesses and ensure the longevity of the park.  Moreover, the continued success of the Hauppauge Industrial Park will serve as a prime example of the benefits of upward expansion on Long Island in supporting a vibrant business community.